Tennessee became known as the “Volunteer State” during the War of 1812 due to the key role played by volunteers from the Tennessee militia. Newspapers of the day touted the military spirit of the men of Tennessee. That reputation was solidified in the Mexican American War of 1848, when President James K. Polk of Tennessee issued a call for 2,600 volunteers and 30,000 Tennesseans answered. 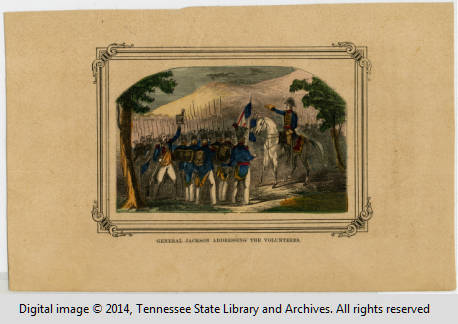 Depiction of General Andrew Jackson addressing volunteer troops during the Creek War/War of 1812, from c1848. Tennessee State Library and Archives.