The Third Saturday in October: Tennessee vs Alabama 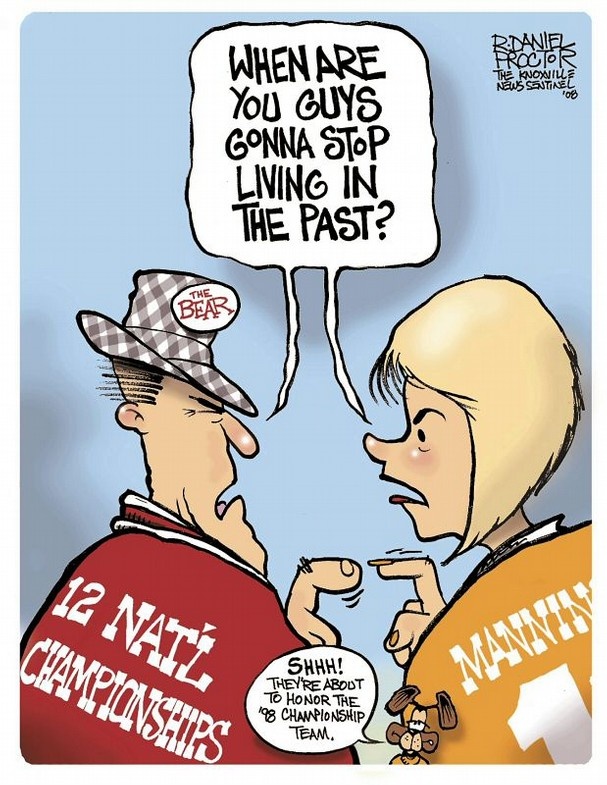 Prior to the Southeastern Conference split into Eastern and Western Divisions in 1992, the Crimson Tide and Volunteers always faced off on the Third Saturday. Since then, the game usually occurs in mid-October, with the Third Thursday schedule hitting eight times since 1995, including October 21, 2017 — the 100th game in the series, which started in 1901.

The Crimson Tide owns the longest winning streak in the series, 11 wins from 1971 to 1981. The Volunteers broke the streak in 1982, in what many Vol fans think was one of the stand-out games in the series. Tennessee Coach Johnny Majors squared off against the Crimson Tide’s legendary coach, Paul “Bear” Bryant. 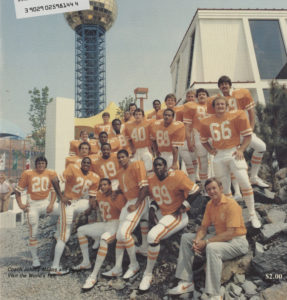 In his memoir, You Can Go Home Again, Coach Majors recalls how hard it is to break a losing streak — “winners are used to winning and losers to losing and… there always will be that little seed of uncertainty running around somewhere in the back of our mind.”

Things looked bleak for the Vols toward the end of the game in 1982, but defensive end Mike Terry intercepted a Walter Lewis pass in the end zone with just 17 seconds left in the game, preserving the 35-28 Tennessee win over No. 2 Alabama. The Tennessee players carried Majors on their shoulders onto the field as time expired, and Coach Majors shook hands with Coach Bear Bryant for the final time. (Coach Bryant retired at the end of the season.) 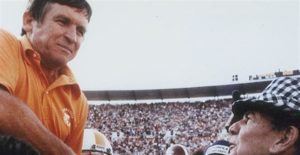 Coach Majors recounts Coach Bryant’s words to him after the game: “Johnny, you had a great game plan.” Coach Majors thinks the key to the win was his players — the likes of Alan Cockrell, Willie Gault, Chuck Coleman, and a defense that shut Alabama down well into the fourth quarter.

The Tennessee crowd went wild, rushing the field. Coach Majors sent the team from the locker room “to take another bow.” “An hour after the game had ended,” Coach Majors writes, “there still were several hundred fans milling around the field.” Others had torn down the goal posts and carried them to “the Strip” — Cumberland Avenue — in jubilation.

Tennessee went on to a 4-game win streak from 1982 to 1985. Going into the Third Saturday in October in 2017, No. 1-ranked Alabama owns a 10-game streak. Soon history will be made — Bama tying the record 11-streak record, or Tennessee fans celebrating deliverance from the streak yet again.