The term “Tennessee whiskey” does not apply to all whiskey made in Tennessee. In order to be recognized by the State of Tennessee as such, Tenn. Code Ann. § 57-2-106, Tennessee whiskey must be produced in Tennessee and meet both the legal requirements for bourbon (use a mash of at least 50 percent corn, be aged in new charred oak barrels, and meeting limits on alcohol content, distilling concentration, aging, and bottling), and use the Lincoln County process, which means the whiskey must be steeped in or filtered through maple charcoal chips (often sugar maple) before going into casks for aging. The two largest distillers, Jack Daniel’s and George Dickel, use this process, though there is a legal exception for Benjamin Pritchard’s, which does not use the Lincoln County Process but is still Tennessee whiskey.*

Whiskey production has a rich history in Tennessee that survived both national prohibition and a longer statewide prohibition. As Scottish, Scots-Irish, and Irish immigrants moved to the frontier in the late 18th century, they brought their distilling practices with them, though they primarily used rye rather than corn. Whiskey consumption increased nationally, and many farmers found that turning their corn into whiskey yielded better profits. The temperance and prohibition movements of the mid-19th and early-20th centuries nearly destroyed the whiskey industry in Tennessee, and Jack Daniel’s and George Dickel were the only Tennessee whiskey producers to survive this period. Today, Tennessee whiskey has enjoyed a revival, with many smaller distillers emerging to take part in this Tennessee tradition and offering tours to visitors from near and far.

*Whiskey produced in Tennessee that does not follow this process is often labeled “corn whiskey.” Moonshine, which is also often made in Tennessee, is a form of corn whiskey that is not aged. 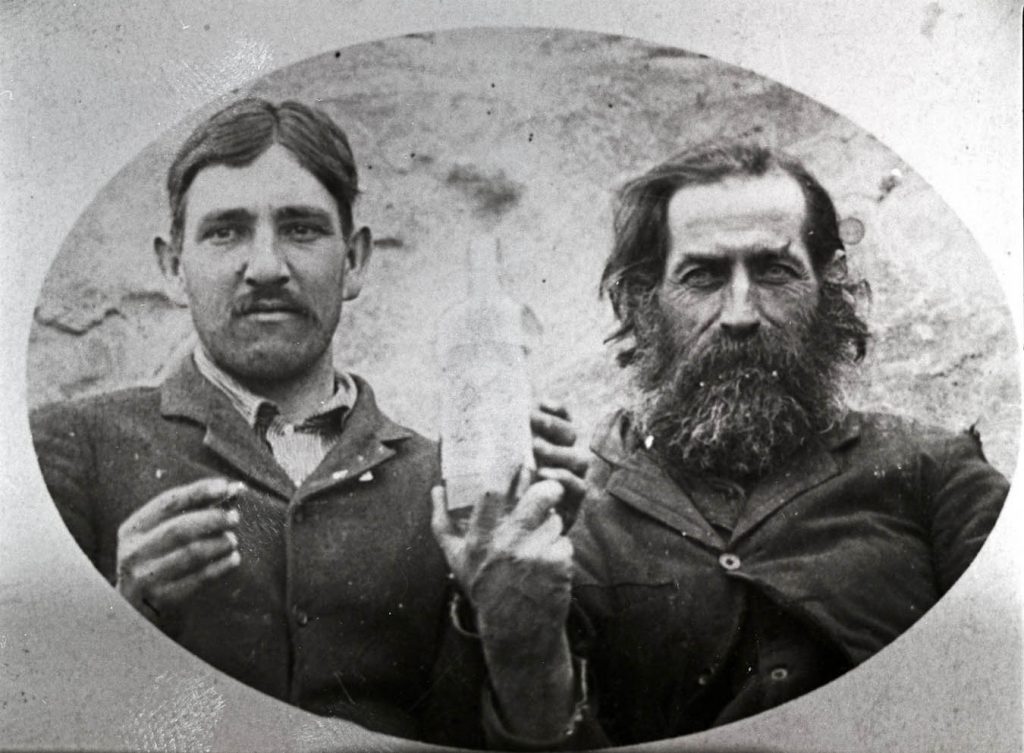 Bud Miller and Bob Swann with the first bottle of legal whiskey from the distillery south of the river Dandridge, Tennessee, ca. 1905. Looking Back at Tennessee Collection, Tennessee State Library and Archives.