“Take me to another place…”: A Hip Hop Group’s look at Tennessee

From Dolly Parton’s “My Tennessee Mountain Home” to Johnny Cash’s “You and Tennessee”, the Volunteer State has had a special place in country music, especially among performers native to the state. But country is not the only Southern genre to use Tennessee as its muse. In 1992, an Atlanta-based hip hop collective took listeners on a spiritual journey to Tennessee.

After the death of his grandmother and older brother, Speech (born Todd Thomas), the lead emcee of the rap group, Arrested Development, penned a prayer to God:

Take me to another place

take me to another land

make me forget all that hurts me

let me understand your plan.

And for some strange reason, it had to be, his God guided him to the last place he had seen his brother and grandmother, Tennessee. 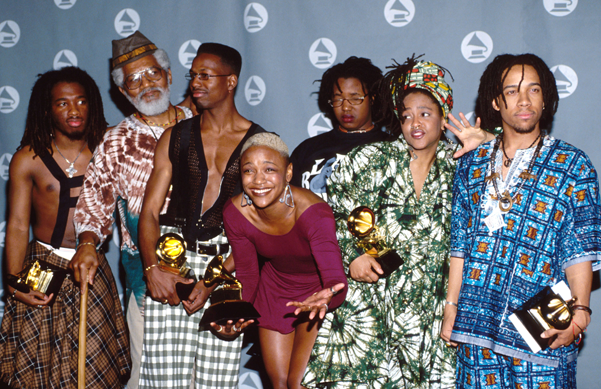 Although a native of Milwaukee, Speech knew Tennessee intimately. He had familial roots in the small rural town Henning where he, like the famed author Alex Haley, spent many of his childhood summers gardening, cotton picking, and learning his family history from his grandmother, Ardenia Churn. Known as the “Fannie Lou Hamer” of Henning, Mrs. Churn was a fierce advocate for black enfranchisement and helped black residents register to vote as a precinct committeewoman. When Speech decided to pursue music, he channeled her political spirit into his art.

In 1988, a year after moving to Georgia to study music at the Art Institute of Atlanta, Speech formed a rap duo with fellow classmate and turntabalist Headliner (born Timothy Barnwell). The duo eventually grew to an eight-member crew of musicians, dancers, and spiritual leaders known as Arrested Development. With a sound much different from the popular and controversial hip hop genre, gangsta rap, Speech and his band family had a clear vision for their “conscious” rap collective: to promote antiracist and antisexist politics, Afrocentrism, black history, and Southern aesthetics by way of hip hop

It was in rural West Tennessee, past Dyersburg, into Ripley, that Speech found the spiritual and political enlightenment he sought for himself and his people. He walk[ed] the roads [his] forefathers walked and climb[ed] the trees [his] forefathers hung from. In his quest for understanding, he realized the importance of history; that the legacies of slavery and racial terror were reasons why [his] people be in the mess they be. By the end of his journey, he discovered the ultimate truth, which could only be found at home, in Tennessee.

With moving vocals from fellow members Aerle Taree and Dionne Farris and a sample from Prince’s “Alphabet Street”, Speech put his gospel to music to produce “Tennessee,” the lead single on Arrested Development’s debut album, 3 Years, 5 Months and 2 Days in the Life Of…. The upbeat ballad and its poignant music video earned a bevy of accolades and catapulted the underground group into the national spotlight. “Tennessee” reached #1 on the U.S. Billboard Hip Hop/R&B charts and peaked at #6 on the U.S. Billboard Hot 100. The music video also received major airtime on MTV and earned the group the 1992 MTV Video Music Award for Best Rap Video. The following year, Arrested Development won the Grammy Award for Best Rap Performance. “Tennessee” was even used as the theme song for the short-lived sitcom, Here and Now, featuring Malcolm-Jamal Warner of the hit television series, The Cosby Show. Currently, “Tennessee” is listed as one of the Rock and Roll Hall of Fame’s 500 Songs That Shaped Rock and Roll.

For Speech, the popularity of “Tennessee” evoked a mix of emotions. In the January 1993 issue of SPIN Magazine, he admitted that performing the song regularly brought him to tears. Still, he could not spurn the dancing and celebration that “Tennessee” inspired among its listeners. “Any honest reaction to music is valid,” he told the reporter. Speech was correct. Like so many other songs about the Volunteer State, “Tennessee” continues to move people: to sing, to mourn, and to reflect on their places in the world, in time, and for Speech, in Tennessee.