“I just don’t want to lose, so I go all out every game to prevent it.”

Nera White, arguably the greatest basketball player from the state of Tennessee, hailed from Macon County. Named the most valuable player for her high school district in 1954, the Naismith Memorial Basketball Hall of Fame inducted White in 1992 – she and Lusia Harris the first women players to be so honored. *

In between, Nera White was a 15-time AAU All-American, led Nashville Business College to 10 AAU national championships between 1955-1969, garnered the Most Valuable Player at the AAU national tournament 10 times, and led the USA to a gold medal in the 1957 World Championships. 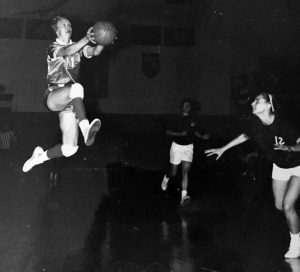 In 1892, Senda Berenson organized the first women’s basketball team at Smith College – the game had been invented by James Naismith the year before. By the early 1920s, Tennessee was one of the first states to offer interscholastic basketball for girls, and the sport exploded in high schools across the Volunteer State.

White played ball at Macon County High School, a starter from her freshman year. Coach John Head scouted White for the legendary Nashville Business College AAU team, which she joined after graduation in 1954. Head thought 1966 was White’s best year. Hall of Fame Coach Harley Redin praised her greatness: “She’s the only woman who can do everything – rebound, defense, handle the ball, and score.” 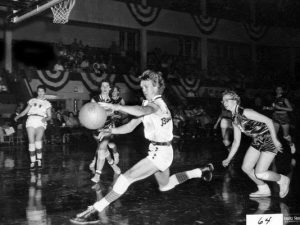 According to the Naismith Memorial Basketball Hall of Fame, “Nera White was one of the most complete female players of her era and a pioneer during the early days of women’s basketball. Film clips replay her extraordinary talents, with her overall ability far exceeding other players of her era. She was quite simply faster, quicker, and stronger than most women of that generation…. A player whose skill and athleticism were before her time, White was one of the best woman players in the world.”

When asked about reaching her limits as a player, White herself said, “I don’t think I ever did. I learned something new every year.” In the same 1992 Tennessean interview, White spoke to toughness: “I didn’t have time to lose. I didn’t have time to play on a losing team because of people partying all night long. I thought to be a winner in basketball, you had to be a winner 24 hours a day. It’s hard to get to the top, and you’ve got to have maturity to stay there.”

White’s playing days pre-dated the revolution in women’s sports after Title IX, in 1972, created college scholarship programs, which helped lead to the WNBA. But her greatness helped pave the way for later athletes. The Tennessee Sports Hall of Fame inducted Nera White in 1969, the same year as her retirement. 30 years later, in 1999, the National Women’s Basketball Hall of Fame recognized White in the new Hall’s first class of 25 inductees. 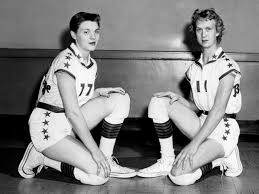 Born the oldest of 7 on the family farm near Lafayette in 1935, the 6’1” White credited her height and strength to “getting the first milk.” In 1982, she returned to the family place, raising cattle and tobacco. There she lived quietly, helping her new “team” in the farming community, until her death in 2016.

Her final and perhaps best tribute came from her neighbors: “She was always willing to lend a helping hand to someone in need. During the cold winter months, Nera would take hay to people that didn’t have enough for their animals. She had a heart of gold and her passing will be a devastating loss to those who knew and loved her.”

*Only two other Tennessee-born players join White in the Naismith Memorial Basketball Hall of Fame, as of 2017, Oscar Robertson and Bailey Howell.