In the beginning of the 19th century, Santa Claus was depicted as a stern disciplinarian, often holding a switch. He wrote letters warning children to behave, rather than children writing letters to him. 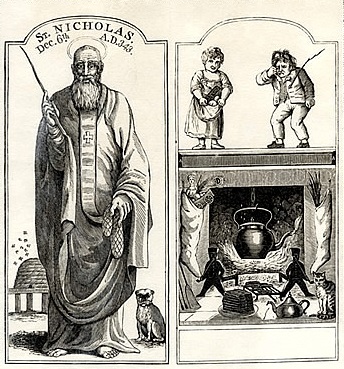 Our modern image of Santa Claus as a benevolent, jolly old elf owes much to Thomas Nast, illustrator for Harper’s Weekly. The cover and pages 8 and 9 of the January 3, 1863 issue show how Christmas celebrations were interrupted by the Civil War. This issue, located and documented by Tennessee State Library and Archives staff in Jamestown, Fentress County, shows “Santa Claus in Camp.” The younger soldiers play with a jack-in-the-box, while the older men await care packages and news from home. The double spread within the magazine shows a family separated by war. The mother kneels in prayer, while the children sleep. Many miles away, the father gazes upon their portraits. On the home front, Santa Claus prepares to slide down the chimney while the reindeer wait. At the camp, Santa tosses presents to the lonely soldiers. 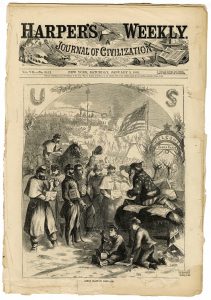 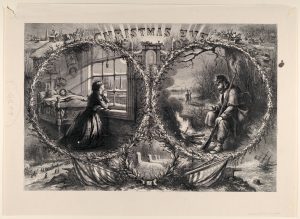 After the Civil War, the tradition of Santa Claus writing to children continued in the local newspapers, effectively combined with advertising. Santa Claus announces to the gentlemen of Camden, Benton County, that “Fine Albums, large and small, Plush Work Boxes, Muni-ware Sets, Smoker’s Sets, Whisk-Broom Sets, Toilet Sets, Dressing Cases, Bisque and China goods, Picture and Story Books, Dolls, Tea Sets, and an endless variety of Toys and other pretty things” are available at the Hatley Drug Company. The manager Eugene Morris assures the readers that “Santa Claus has not forgotten the little folks, the young folks, nor the old folks of Camden and Benton County.” 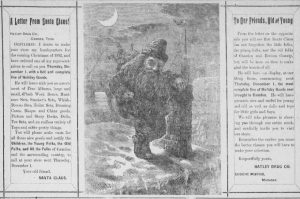 In 1895, Santa Claus’ “Little Friend, Minnie E. Morris,” who lived just five miles from Maryville, Blount County, submitted a letter to the Maryville Times. She requested “a big doll, and a book to read.” The bemused editors replied that they would do their best to forward the letter. 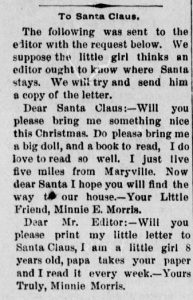 By 1899, newspapers such as the Columbia Herald were regularly soliciting and printing letters to Santa Claus in special issues. Alleen Overton, of 116 S. G. St., Columbia, Maury County, asks for a long list of toys for herself, her “tom boy sister,” her “Mother and Papa,” and the good little children at the First Presbyterian Church on Garden Street. Alleen grew up to marry Waverly Hayes Jackson and served as the organist at her church for many years. 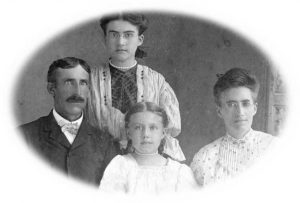 Columbia, Tenn. Dec. 8, 1899—Dear Santa Clause—I will write and tell you where I live. And I want you to be sure and stop at my house. I think I am a good little girl. And I know I have got a good little sweet sister. And what ever you do don’t forget us. I want you to bring me a little curly heady doll that will go to sleep. I like dolls but I don’t brake them up like other children I take care of my dolls I don’t play with them all the time and besides I want you to bring me a little wardrobe to hang my doll clothes in and real nice set of China dishes not a cheap set but a fine set. And I want a doll buggy and a doll rocking chair a little piano. I know you will laugh Santa Clause when I tell you my little tom boy sister wants a wagon to pull like boys. She says she just want a waggon and a doll and a lot of bananas, she could eat a dozen bananas right now but bring her a hold lot of things and don’t forget Mother and Papa and what ever you do Santa Clause go to our church the first C P Church on Garden Street where there will be so many real good little children waiting for you and I am going to try to be good I had to miss Sunday school last Sunday because I had the measles but I will be there this Sunday. I will close dear old Santa Clause. ALLEEN OVERTON. 116 South G. St., Columbia, Tenn.

Dolls and doll accessories were a common request from little girls across the state, including Johnson City’s Ethel Gertrude Hankins, who asks for “a great big doll that it will shut its eyes and go to sleep;” Katie Boyd, of 1603 Harding Street, Nashville, Davidson County, who wants “another Negro doll for my other dolls are so lonesome by themselves;” and Anna Love Wyman of Jasper, Marion County, who requests “a big doll, one that can go to sleep, and I want a bed for her to sleep in.” Some children are more modest in their wishes. The White sisters, Kate, Leona, and Frankie, also of Johnson City, remind Santa Claus that they “have no dear papa like other tots” and that Santa Claus had overlooked them the previous Christmas. They want only “something nice.” Boys asked for firecrackers, trains, wagons, fire engines, tinker toys and “anything else you think a 9 year old boy would like,” according to William J. Oakes of Columbia, Maury County. 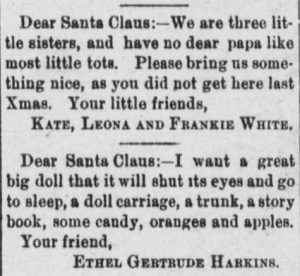 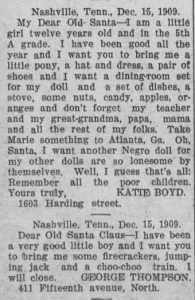 The letters to Santa Claus from Tennessee children between 1895 to 1920 reflect a growing prosperity, the mass manufacturing of toys, and the commercialization of the holiday. The innocent wishes of the children are familiar to us today, as well as their heartfelt concern for their family, friends, and those less fortunate than themselves. 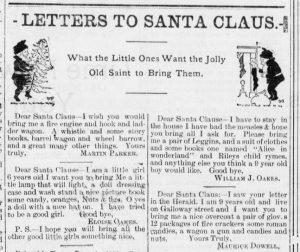