“If I die you will know that I died as every man should—in fighting for the right. I do not consider that I am fighting for France alone, but for the cause of humanity, the greatest of all causes.” 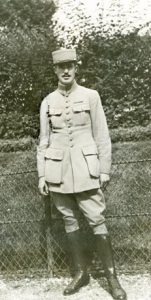 Kiffin Yates Rockwell wrote these words to his mother, Loula Ayres Rockwell, as he served as a fighter pilot in the renowned Lafayette Escadrille in World War I. Born in Newport, Tennessee, in 1892, Kiffin and his brother Paul enlisted in the French Foreign Legion in August 1914 – shortly after the war began on July 28, 1914. They were among the first Americans to fight in the Great War – the United States would not officially join the fray until April 6, 1917. By then, Kiffin Rockwell had become a hero to the French.

Rockwell fought in the trenches until May 1915, when he was wounded by machinegun fire. While recovering, he requested a transfer to the newly formed French aeronautical service. In April 1916, Rockwell became a founding pilot in the squadron Escadrille Americaine, later called the Lafayette Escadrille. 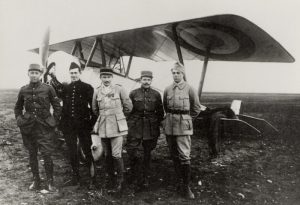 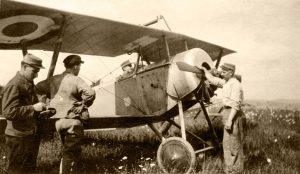 On May 18, Rockwell shot down a German plane, the first American pilot to do so in the war. Over the next few months, Rockwell flew in every mission of his squadron and in scores of patrols. After a brief leave from the continual combat, Rockwell returned to duty in September. He had survived over 140 dogfights and been awarded the Médaille Militaire, as well as the Croix de Guerre with palm, from the hands of General Joseph Joffre, Commander-in-Chief on the Western Front. 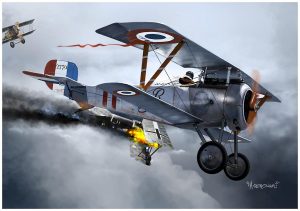 Flying a new, improved Nieuport 17 aircraft on patrol over Verdun on September 23, 1916, Rockwell encountered a 2-man Aviatik, and dived toward the enemy plane from 10,000 feet, so close that an eyewitness thought there would be a collision. The German gunner shot Rockwell in the chest, killing him instantly. His plane hurtled earthward, crashing among the French trenches.

Rockwell’s squadron comrades, fifty British pilots, and French pilots and mechanics attended the hero’s funeral and burial with honors on the Lafayette Escadrille’s field at Luxeuil-les-Bains. The funeral cortege included a flower-decked gun carriage followed by a regiment of French territorials and a battalion of colonials. Captain Georges Thenault, commander of the Escadrille, spoke at the service: Kiffin Rockwell’s “courage was sublime… The best and bravest of us is no longer here.” 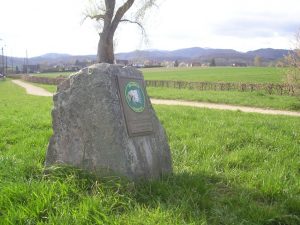 Marker at Rockwell crash site. The screaming War Chief was the insignia of the Escadrille. (Stephane Manet, 2010)

Chicago Daily News war correspondent Paul S. Mowrer reported, “Some days before his death [Rockwell] specified that if he should be killed by the Germans, whatever money was found on him should be used by the squadron to drink to the destruction of the Germans. This was solemnly done. A bottle of old Bourbon whisky which had been given to Rockwell by an American in Paris, will be opened hereafter when members of the squadron bring down Germans. On these occasions, a few drops will be poured out for the victor in honor of Rockwell’s memory…”

A historical marker in Newport memorializes Rockwell Kiffin, as does a headstone among his relatives in the Jarnagin Cemetery in Morristown. His name is inscribed on the wall of the Pantheon in Paris. A French Air Force camp, a United States Naval airfield in San Diego, and the VFW post in Newport were named in his honor.

So let us still remember Kiffin Rockwell, military hero and son of the Volunteer State, one veteran among many who have fought “for the cause of humanity, the greatest of all causes.”