“No social event in recent years has excited public interest to so intense a pitch as the wedding of Miss Kate Thompson to Mr. Van Leer Kirkman,” declared the Memphis Daily Appeal society editor on December 31, 1886.

What can be more exciting than a New Year’s party? The New Year’s wedding of “the catch of the State” and “the acknowledged belle of Memphis”! 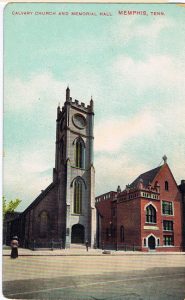 Newspapers in Memphis, Nashville, and Little Rock covered the evening wedding on Thursday, December 30, 1886, at Calvary Episcopal Church in downtown Memphis. Despite freezing drizzle and muddy streets, people began to arrive at 6 p.m. When the church doors opened at 7, the two policemen on duty “were immediately overwhelmed” by the “dense crowd,” as over 1,000 guests filled every possible seat in the church. When the groom’s party of more than 40 Nashvillians arrived, they were unable to move through the mass for 20 minutes – one lady in the group fainted from the press. The bride and her attendants had problems too, standing in the weather “for five minutes exposed to wet hair and the peril of the rush.” 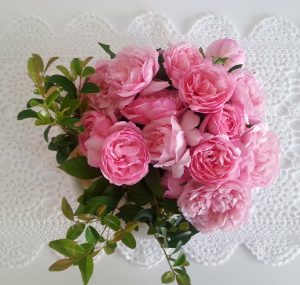 But the spectacle of the wedding was worth it. The nuns of St. Mary’s Episcopal School, where Kate Thompson had been a pupil, decorated the church with flowers. Eight couples of bridesmaids and groomsmen processed down the aisle and flanked the groom and best man in two columns. The men wore “the customary [black] evening dress, the bridesmaids red tulle skirts with red velvet bodices, and carried in their hands bouquets of Duchesse of Brabant roses, tied with pink ribbons.” 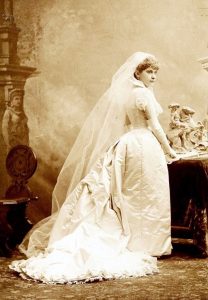 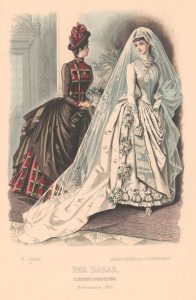 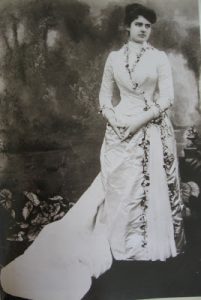 “The bride was a picture of surpassing loveliness,” as her cousin West J. Crawford, led her down the aisle. Kate, 22, “noted for being one of the most beautiful women of Tennessee,” wore a bridal gown of “white moire en train, with white tulle overskirt” and a veil of white tulle with orange blossoms. She wore no gloves or other ornament, and carried a bouquet of white flowers and her white ivory prayer book. She gave the prayer book to the Rev. David Sessums for the service. “An involuntary exclamation” from “a thousand pair of cherry lips” rose in the air at the vision of the bride.

The groom Van Leer Kirkman, wealthy, widowed, and 37, wore black evening dress. He was declared “as far as manly beauty goes, a fit mate for the superb woman he has won… as fine a specimen of physical manhood as one will see in a day’s travel.”

After the wedding service and the sermon, Rev. Sessums returned the prayer book to the new Mrs. Kirkman. As the couple moved out of the church to the organ playing the grand march from Wagner’s Tannshouser, “an involuntary sigh ran through the audience as the fair vision faded out of sight.”

After the wedding, the newlyweds went first to a reception at the mansion of the bride’s grandmother, the wealthy Catherine Jones Thompson. One room, devoted to the exhibition of “costly” presents of “wide variety,” included the “complete silver service, consisting of 110 pieces,” Thompson gave to her granddaughter.

The bridal guests then went on to the New Year’s party of the Memphis Merchants’ Exchange at the flower and evergreen-bedecked Cotton Exchange Building. The popular Arnold’s Band played into the wee hours as 500 revelers danced. 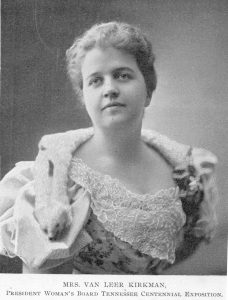 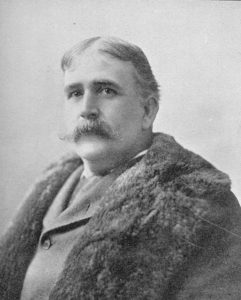 Did Kate and Van Leer live happily ever after?

Kate entered the marriage with a dowry including an annual income of $1,000 and a $10,000 gift from her grandmother. She and her sister were also heirs to the considerable estate of her grandparents – her recently deceased grandfather Jacob Thompson was a millionaire. Van Leer was the heir to a fortune that included ironworks in Dickson County and lived on his investments. He “was a great lover of the turf and owned a large number of race horses.”

In 1887, the wealthy newlyweds built a mansion on their estate and thoroughbred farm, Oak Hill, south of Nashville on the Franklin Pike. To some the house suggested “a French chateau.” Kate had three sons, Van Leer Jr. (1887), Caswell Macon Thompson (1889), and Anthony Wayne (1893). The Kirkmans became noted civic and social leaders. 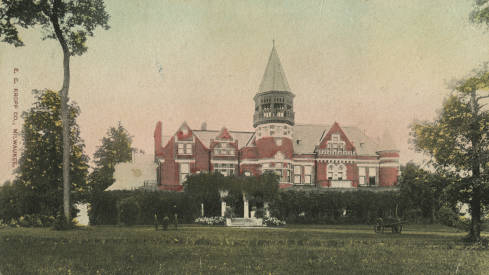 The high point of the couples’ public career came with the Tennessee Centennial Exposition Company. Van Leer served as First Vice President of the organization, while Kate was President of the Woman’s Board. Kate oversaw the planning and funding for the Woman’s Building at the 1897 fair and was honored with a floral parade on “Kate Kirkman Day.” Van Leer worked hard too – to the point that he “suffered a heat stroke” during one of the exposition’s important days. He never recovered, remaining an invalid until his death in 1911. 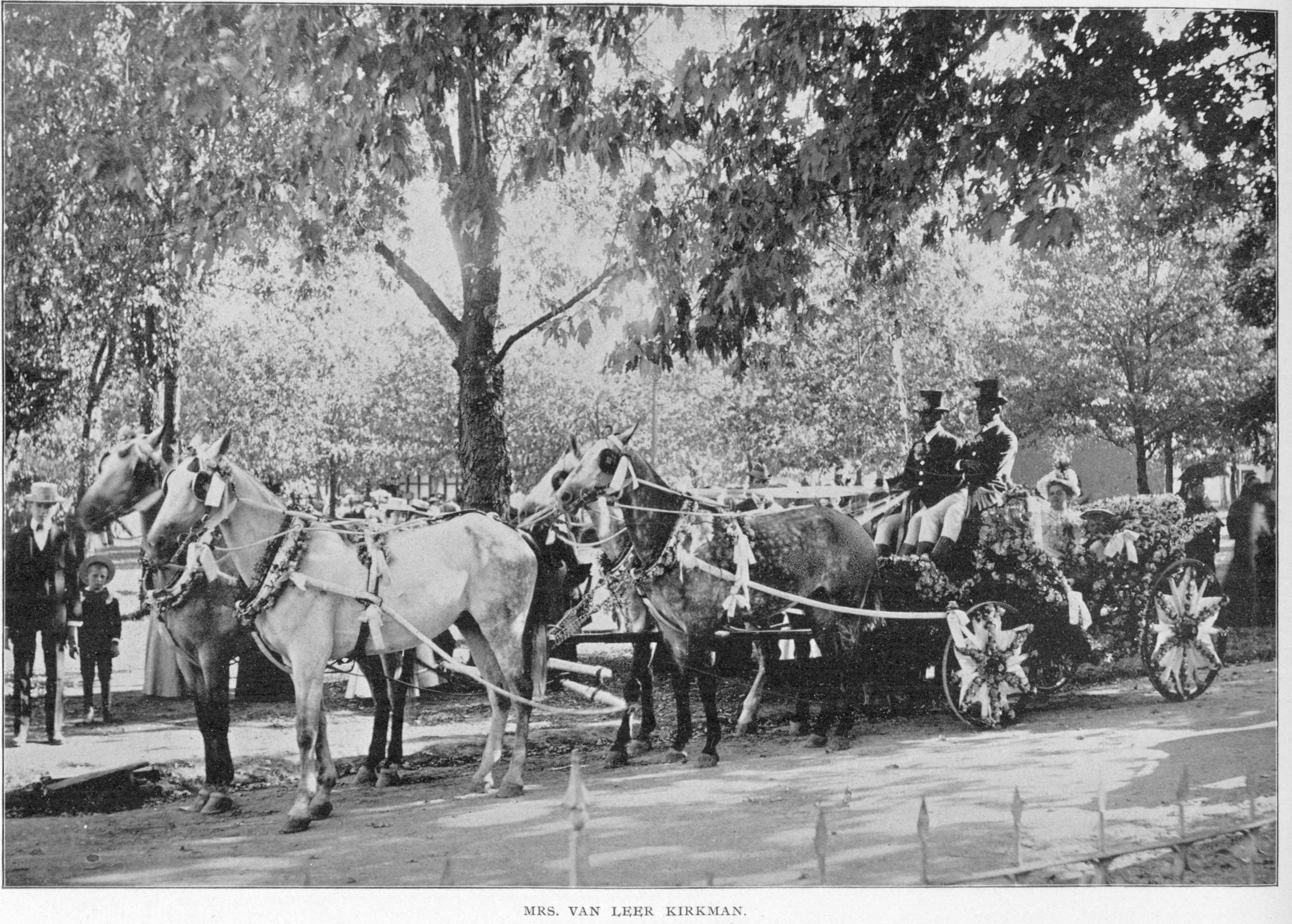 As a widow, Kate continued her community work in areas of education, the Episcopal church, and historic preservation. During World War I, she was chairman of the Red Cross “drive to provide linen to supply the hospitals of France,” and was so successful she received a medal and special commendation.  On a monument now in Centennial Park, Kate is quoted on “Woman’s Work” – it is “whatever may be necessary to preserve the sanctity of the home and ensure the freedom of the state.”

A belle until the end, Kate lied about her age on her 1924 passport application, shaving off 5 years. Nevertheless, when Kate passed away after a long illness in 1926, a few months shy of her 62nd birthday, the Nashville Tennessean observed, “Great distinctions which came to her left her unspoiled and she counted devoted friends in many walks of life.” The writer also noted, “She was counted as one of the South’s belles.”

We doubt few New Year’s Eve weddings have surpassed the magnificence of the one on December 30, 1886, in Memphis.