Some historical documents ask more questions than they answer, and this document in the Tennessee Historical Society collection at TSLA is no exception. Written in neat, compact script, P.A. Wilkinson, a juror from Carthage, Tennessee, details the case of the State vs. Jane, a Slave in 1841. Jane, 15, was on trial for the murder of her master William Ballinger. An enslaved youth, Fred, 17, had already been convicted and hanged for the murder, and Jane was accused of acting as his accomplice. Wilkinson recounts the grim details of the murder, including how witnesses discovered Ballinger’s body in the river with rocks tied to his neck, and sketched a map of the crime scene. The recorded testimony also contains an account by Eliza, an enslaved woman who describes Fred’s violent temper and says that she and Jane were both afraid of him.

The account contains what seems like convincing circumstantial evidence for Jane’s involvement in the cover up, if not the murder, but the jury finds her not guilty. Wilkinson’s report gives no explanation for the decision, and Jane disappears from the historical record. We do know that white people, especially slave owners, preferred to believe that very few enslaved people had violent thoughts or were capable of violence toward whites. Having executed Fred, did the jurors imagine that Jane had simply been led astray and pressured to comply rather than being a willing participant? We will never know Jane’s thoughts or what exactly happened, but documents like this provide windows into antebellum life and the complex relationships between masters and enslaved people. 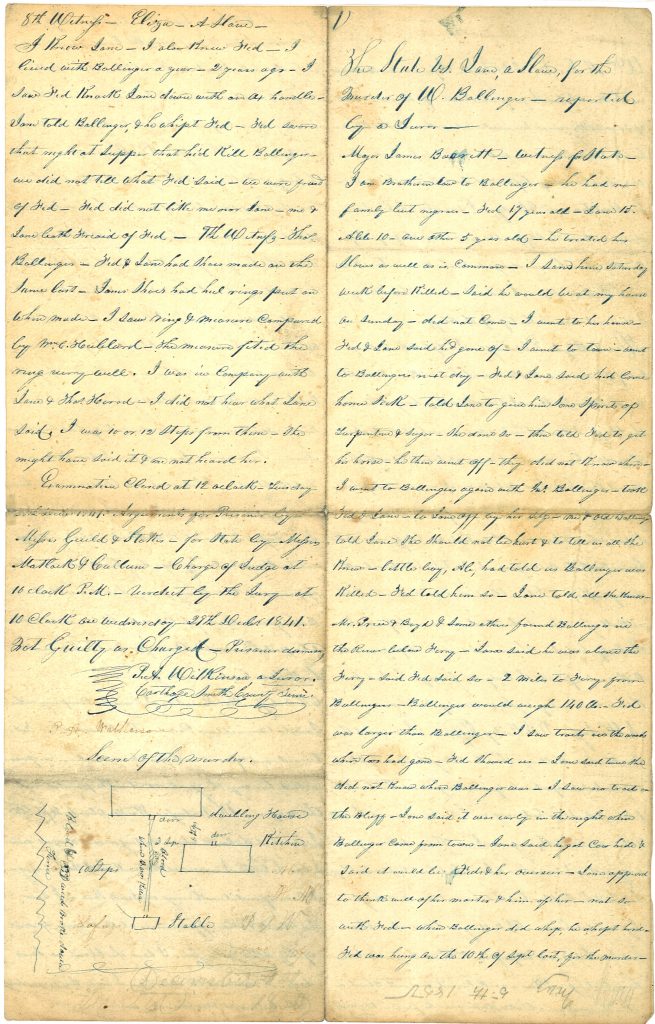