Who is James K. Polk?

“Let a strong appeal be made to the Delegates as fast as they come in, to take the matter into their own hands, to control and overrule their leaders at Washington, who have already produced such distraction, and thus save the party.”

On May 14, 1844, just days before the Democratic National Convention in Baltimore, James K. Polk wrote Cave Johnson, with an emphasis on “the matter,” that he would stand as “a new man for President.” 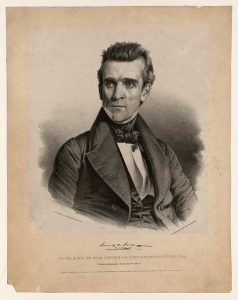 James Knox Polk (November 2, 1795 – June 15, 1849) was not supposed to become president in 1844; he wasn’t even supposed to be the Democratic nominee. Often referred to as a dark horse candidate, Polk’s opponents mocked him with the question, “Who is James K. Polk?”

Despite this derision, the second U.S. president from Tennessee was hardly an unknown quantity. Prior to his selection as the Democratic nominee, Polk – also called the “Napoleon of the Stump” — had served as a state representative for Maury County (1823-25), as a Congressman (1825-39), and as governor of Tennessee (1839-41). From 1835 until he left the Congress to become governor, Polk served as Speaker of the House and played a critical role in staving off the conflict over slavery by using the gag rule to prevent any petition related to abolition of slavery from reaching the floor. 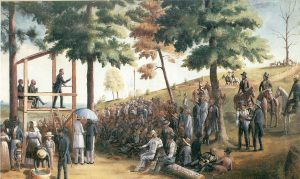 Polk speaking on the “stump” in Knoxville, 1840 (Tennessee State Museum)

Though Polk was nicknamed “Young Hickory,” acknowledging his strong connection with Andrew Jackson (“Old Hickory”), Polk’s affiliation with Jackson was one of policy rather than personality. Where Jackson was known for his fiery temperament, Polk was level-headed and never fought a single duel, despite insults to his honor while in Congress.

Polk’s policies, including his desire to annex the Texas Republic to the United States, strongly tied him to Jackson. Old Hickory believed “the candidate for the Presidency should be an annexation man and reside in the Southwest, and he openly expresses (what I assure you I had never for a moment contemplated) the opinion that I would be the most available man…,” Polk wrote Johnson. With Old Hickory’s blessing, the dark horse Young Hickory was off to the presidential races. 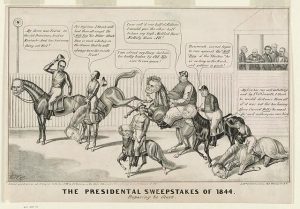 A political cartoon shows Polk as a bucking horse in the 1844 race. (Library of Congress)

In the first ballot at the Democratic Convention, front runner Martin Van Buren – who opposed Texas annexation – split the vote with Richard Johnson and Lewis Cass. By the third ballot, none of the three emerged with a majority. Ballots were cast a fourth, fifth, sixth, and seventh time, with James Buchanan garnering some votes in addition to Van Buren, Cass, and Johnson.

On the eighth ballot, a new name popped up with 44 of the 262 votes cast – James K. Polk. But still no one had a majority. If the Democratic Party was to avoid destruction of the party at the national level, the Democrats needed a nominee fully committed to the immediate annexation of Texas, yet capable of unifying the party in the general election. Martin Van Buren threw his support behind Polk – and Polk won on the ninth ballot, ultimately garnering a unanimous vote on May 30, 1844. George M. Dallas was elected to be Polk’s running mate. 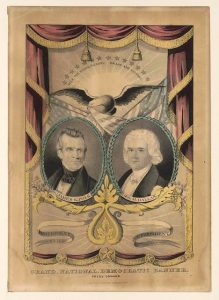 The Democratic platform called for strict construction of the U.S. Constitution, opposition to federally funded canals, roads, and other improvements, condemned federal interference in how states handled slavery, and called for “reoccupation of Oregon and the re-annexation of Texas.”

The Whig Party chose Henry Clay of Kentucky as their presidential candidate, who opposed the immediate annexation of Texas. The Whig platform also supported high tariffs, a one-term presidency and restrictions to the presidential veto. Whig vice-presidential candidate Theodore Freylinghuysen brought anti-slavery views to the ticket. 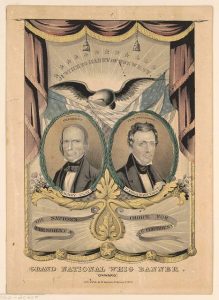 The Whigs called Polk a nobody compared to Clay. “Who is the opponent of Mr. Clay?” asked fiery Whig orator S.S. Prentiss. “A blighted burr that has fallen from the mane of the war-horse of the Hermitage!”

In mid-November, after receiving unofficial notice of his election to the presidency, Polk spent the day as he usually did in Columbia, never letting on that he had won. 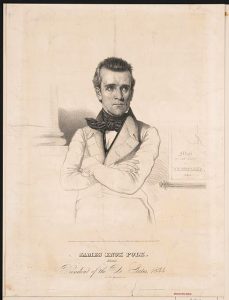 But Robert Armstrong, a Polk partisan, was not so modest. On November 15, he wrote to Polk from Nashville:

“It is all confirmed by the mail of tonight. What a Triumph – I am too much rejoiced to be reasonable in my Expectations. Ewing has been addressing Thousands tonight from the Bank Steps and the Cannon is roaring every note of which reaches the Old Chief of the Hermitage who had the News Two Hours after it arrived here. We (the Democracy) are all happy and rejoicing.”

By Abigail Gautreau and Ann Toplovich