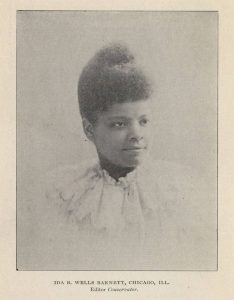 The city of Memphis has demonstrated that neither character nor standing avails the Negro if he dares to protect himself against the white man or become his rival. There is nothing we can do about the lynching now, as we are out-numbered and without arms. The white mob could help itself to ammunition without pay, but the order is rigidly enforced against the selling of guns to Negroes. There is therefore only one thing left to do; save our money and leave a town which will neither protect our lives and property, nor give us a fair trial in the courts, but takes us out and murders us in cold blood when accused by white persons.

The publisher, suffragist, and civil rights leader Ida B. Wells (later Wells-Barnett) (1862–1931) was born into slavery in Holly Springs, Mississippi. At the age of 20, she relocated to Memphis, Tennessee. After a stint teaching in a segregated school, Wells turned to journalism to record her horror at the many injustices suffered by Black people. As part-owner of the Memphis Free Speech and Headlight, Wells found a receptive audience among the Black community for her editorials on segregated schools, lynchings, and racial discrimination. In the South, white editors, such as Edward Ward Carmack of the Memphis Commercial, subjected Wells to vociferous attacks.

In 1892, three successful Black Memphis businessmen were lynched. Thomas Moss, part owner of the People’s Grocery Store and a close friend of Wells, was one of the victims. In response, Wells penned rousing editorials for the Memphis Free Speech, including Moss’ dying plea for Black people to abandon Memphis and move west. Carmack, angered by Wells’ coverage of the murders, encouraged retaliation against “the black wench,” and the offices of the Memphis Free Speech were destroyed. Wells was out of town and escaped injury. She would not return to the South for another thirty years.

Wells eventually found herself in Chicago, where she turned her attention to the 1893 World’s Columbian Exposition. In the months leading up to the Expo’s opening on May 1, 1893, Wells petitioned its steering committee to include a pavilion showcasing the achievements of African Americans. Her efforts were rebuffed. She also protested the obvious discriminatory hiring practices, which denied many qualified Black applicants well-paying jobs. To appease Wells and her colleagues, social reformer Frederick Douglass (1818–95), journalist Irvine Garland Penn (1867–1930), and Wells’ future husband, lawyer Ferdinand Lee Barnett (1859–1936), the Expo’s managers designated August 25, 1893, as “Colored American Day,” with Douglass as the keynote speaker. 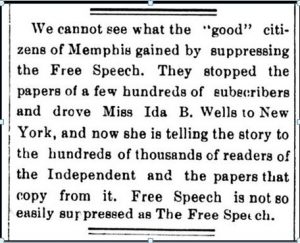 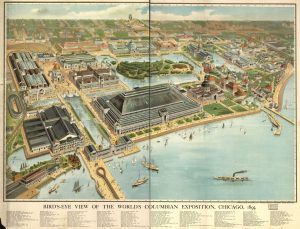 In response, Wells edited the pamphlet The Reason Why: The Colored American Is Not in the World’s Columbian Exposition, published on August 30, 1893. With contributions from Douglass, Penn, and Barnett, these essays detailed the accomplishments of African Americans and revealed the horrors of lynching. The preface, addressed to “The Seeker of Truth” and written by Wells, criticized the Expo’s organizers for excluding Black people and their accomplishments from the exhibits and called for a boycott by the Black community. 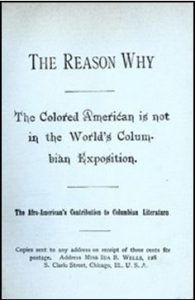 The Reason Why the Colored American Is Not in the
World’s Columbian Exposition (1893)
edited by Ida B. Wells 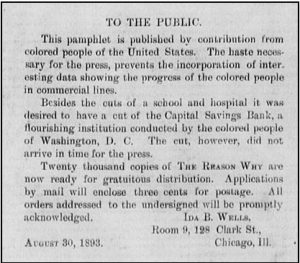 The Reason Why: The Colored American Is Not in the World’s Columbian Exposition, p. 87

It was a clear, plain statement of facts concerning the oppression put upon the colored people in this land of the free and home of the brave. We circulated ten thousand copies of this little book during the remaining three months of the fair. Every day I was on duty at the Haitian building, where Mr. Douglass gave me a desk and spent the days putting this pamphlet in the hands of foreigners.

When no space was dedicated to the native born African Americans, the Haitian Pavilion offered Frederick Douglass occupancy. Wells joined him, and distributed 10,000 copies of the pamphlet. Her intended audience was the international visitor, since the white press of North America failed to acknowledge her efforts. When Douglass was invited on a speaking tour of Great Britain, he declined for health reasons and recommended Wells in his place.

Wells’ speaking tours of 1893 and 1894 attracted international attention, and the white newspapers of her home country could no longer ignore her. By the start of the twentieth century, Ida B. Wells would be recognized as the most prominent anti-lynching activist in the United States. Her activism that began in Memphis challenged sympathetic whites to consider the mistreatment endured by African Americans and encouraged Black people to claim their rights, both in Tennessee and across the nation. 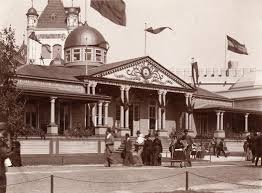 The Reason Why the Colored American Is Not in the World’s Columbian Exposition (1893) edited by Ida B. Wells

Crusade for Justice: The Autobiography of Ida B. Wells (1970) by Ida B. Wells-Barnett, edited by Alfreda M. Barnett Duster

“The ‘Saddle-Colored Sapphira’ versus the ‘Slimy Rattlesnake’: The Rhetorical Melee of Ida B. Wells and Edward Carmack On the Subject of Lynching” by Lisa A. White, Tennessee Historical Quarterly, Vol. 62, No. 4 (Winter 2003), pp. 310-31