Thus Sut Lovingood summed up his opinion of one his adversaries, Parson John Bullen.

Sut was the creation of George Washington Harris (1814-1869), the East Tennessee author and seminal Southern humorist. Harris was a humorist, a Democrat and a Presbyterian, in that order. Although involved in many aspects of East Tennessee development ranging from surveying to river and rail transportation, his major achievement was the creation of Sut Lovingood, a stereotypical “panther streak” mountaineer. Beginning in 1854 as occasional newspaper pieces, Harris’s stories of Sut’s exploits were picked up by other publications, soon giving him a national reputation. Until the 1920s, Harris’s stories, written in Appalachian dialect, were included in college level anthologies of U.S. literature.

Revenge pranks are a common theme in the Sut Lovingood tales. One of the best known stories, “Parson Jack Bullen’s Lizards,” recounts Sut’s payback to Parson Bullen after the Parson found Sut and a friend “conversing” in a huckleberry thicket during the Parson’s camp meeting at Rattlesnake Springs in Bradley County. Bullen whacked Sut with a hickory stick and told on the girl to her mama, who delivered an “overhandid stroppin” to the girl. Telling on her was worse than stealing a horse, in Sut’s estimation.

At the next meeting at the Springs, Parson Bullen began to exhort the crowd to repent:

That’s when Sut unleashed his revenge:

As the lizards ran up into the Parson’s clothes, he began to writhe, and called out, “Pray fur me brethren an’ sisteren, fur I is arastilin wif the great inimy rite now!”

Soon he started flinging off his clothes to be rid of the “hell-sarpints,” until he got to the last stitch: 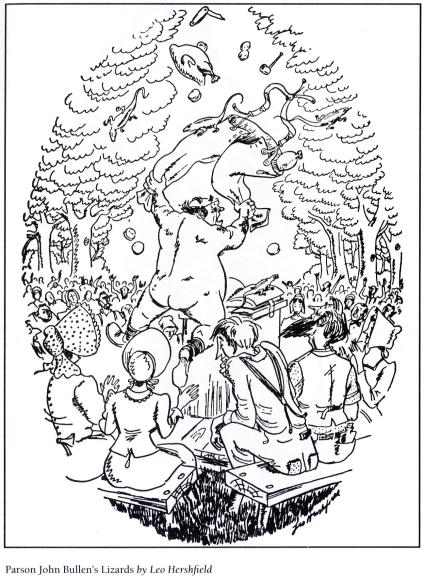 Before long, the Parson and the folks at the revival realized Sut had released the lizards, and they chased him from the campground flinging rocks and bottle at his head.

Humiliated, “Bare Belly” Bullen didn’t preach for a year. But when he did: 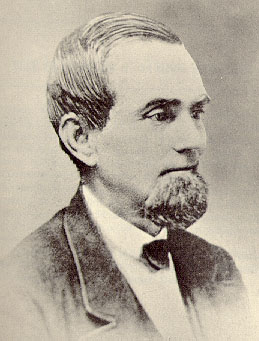 Want more literature? Tennessee is rich in writers and many are featured each October at the Southern Festival of Books in Nashville.