“Je réclame Memphis pour la France” — what he might have said. 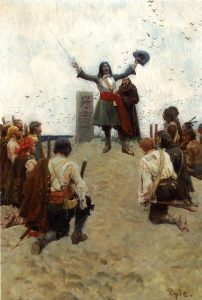 In 1682, René-Robert Cavelier, Sieur de La Salle, claimed what is now West Tennessee for France during his exploration of the Mississippi River.  While on his mission, he constructed the earliest known European military fortification in West Tennessee, Fort Prudhomme. 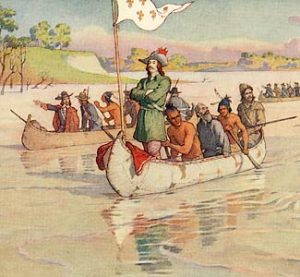 From Roy Rosenzweig Center for History and New Media

When La Salle and his men stopped to hunt on the east bank of the Mississippi River, they lost one of their members, an armorer named Pierre Prudhomme, in the old growth forests and wetlands along the river. La Salle feared his man might have been captured by the Chickasaws, so they built a stockade to protect the group, on the second Chickasaw Bluff south of the Hatchie River. La Salle called it Fort Prudhomme.

Thrown up quickly, the simple campaign fort probably consisted of a small rectangle of pieux en terre, log posts or puncheons, set side by side in the ground and likely pegged together. It possibly included bastions on the corners.

After ten days, Prudhomme returned, safe but starving, and the party continued downriver. 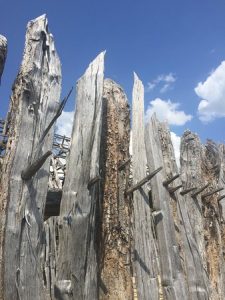 Although La Salle’s expedition stayed near the future Memphis such a short time, Fort Prudhomme appeared on a 1684 French map, prepared in part from information obtained on the 1682 journey. A bastion fort outline and “fort basti a la prise de Cicacha” marks the spot where La Salle erected his structure. 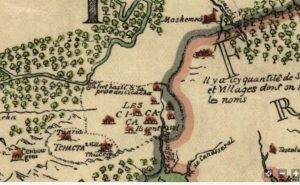 Detail from Franquelin’s map of Louisiana, 1684, Library of Congress

The exact location of Fort Prudhomme remains unclear, although some researchers place it near the later town of Randolph in Tipton County. Meanders of the Mississippi River since the 1680s may have destroyed the site. But the fort lives on in Tennessee history.