“I asked for my girls a raise, and I was refused.” 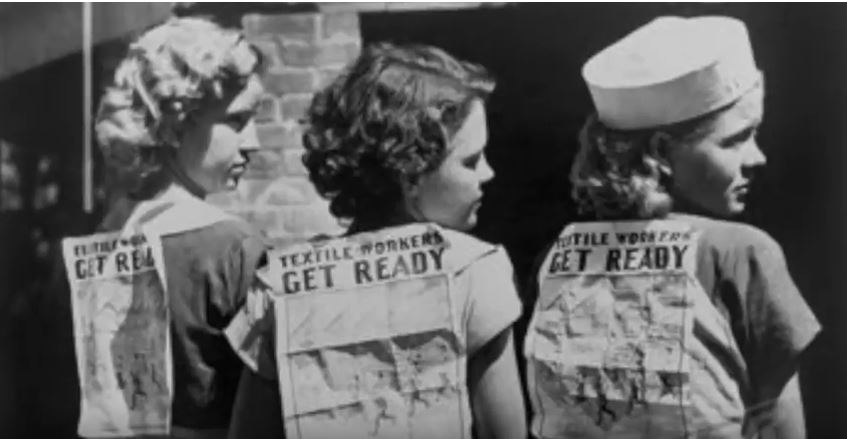 On March 12, 1929, Margaret Bowen, a supervisor at American Glanzstoff in Elizabethton, Tennessee, led a walkout of 523 women operatives. Other shifts of women and men joined the walkout the next day, and the plant closed on March 14. Four days later Bemberg workers struck in sympathy with the Glanzstoff operatives.

As labor movements raised expectations in Tennessee after World War I, fears grew within the general public about labor-related violence. The three-month work stoppage by female workers at the Bemberg and Glanzstoff rayon mills in Elizabethton demonstrate how city and state officials could work closely with local management to impede union activity.

The workers’ protests centered on low wages, unfair promotion policies, and petty regulations that applied only to females. Workers also objected to being pressured to rent houses at high rates from Watauga Development Corporation. At the time of the strike, Glanzstoff employed 1,099 men and 854 women, while Bemberg employed 886 men and 384 women. Although all employees had the same work week, women’s wages were considerably lower than those for men.

When the strike began, Bemberg workers activated Local 1630 of the United Textile Workers Union of America (UTW). Arthur Mothwurf, president of the rayon plants, refused to recognize the union and refused to consider wage increases. At Mothwurf’s request, the Carter County Chancery Court enjoined strikers from picketing, damaging plant property, interfering with plant workers, or assembling at the plant gates. Another injunction prohibited strike activities on roads near the plants.

The workers refused to end their strike. Using mediators, they reached an agreement providing for wage increases, assurances for strikers against discrimination, lifting of the injunctions, and recognition of an in-plant grievance committee. But there was no union recognition. After refusing to sign the agreement, within three days Mothwurf pledged his support and the plants reopened on March 26. But management refused to hire back strikers, including over 300 UTW members.

Then, early in April, a group of Elizabethton businessmen kidnapped two labor officials, dumping them out of state and warning them not to return. When the officials did return, 4,000 workers rallied in outrage at the kidnappings.

Management next dismissed union members of the grievance committees. These dismissals led directly to the second strike, on April 15. On April 20, Governor Henry Horton appointed a mediator, but Mothwurf refused to meet him.

During the second strike, S. C. Rhea, an employee in the Bemberg Chemical Department, organized the “Loyal Workers of Bemberg,” which soon included the Glanzstoff plant. Mothwurf reopened the plants on May 6. The union counted only a few returning members, but management claimed more than 1,100 employees at work on May 11. Management admitted, however, that 500 were “new hires” — strikebreakers.

With the reopening of the plant, Mothwurf persuaded Governor Horton to dispatch 800 National Guardsmen to Elizabethton, an action that turned the strike into a violent, bitter affair. Troops stationed machine guns on roofs and used tear gas against strikers, and in one three-day stretch, from May 14 through May 16, they arrested over 300 strikers. Two houses were dynamited. Two barns, one containing plant machinery, were burned. On May 16, a water main leading into Elizabethton was dynamited. The violence resulted in a deluge of requests from labor and other sources to Governor Horton demanding the removal of the troops from the city. Horton refused.

On May 23 Mothwurf and a second mediator, Anna Weinstock, reached an agreement stipulating that the plants would reinstate former employees, would not discriminate against union members, and would recognize worker grievance committees. On May 25, 2,500 workers grudgingly approved the agreement.

The strikes cost the plants an estimated $500,000 dollars in losses. The issue of discrimination against union workers continued to plague the plants. Management blacklisted between 200 and 300 workers. Strikes over this issue occurred in June and October 1929 and March 1930; workers called off a threatened strike in September 1929. Most blacklisted workers were never rehired. The companies never recognized Local 1630, although a new UTW local was certified in 1940.

As a consequence of Local 1630’s defeat and the treatment of the workers, bitterness and mistrust marked labor-management relations in Elizabethton into the 1990s. Many credit the Elizabethton strikes as the initiators of a wave of strikes that swept across the Piedmont textile industry in 1929 and 1930.

For more on this story, check out Tennessee History Day student Emma Grace Thompson’s national award-winning documentary “Rough in the Bunch: Appalachia’s Rayon Girls Fight for the Right to Strike.”