Q: I simply cannot fit into Nashville society. I try but I can’t seem to say the right thing. I am from New Hampshire and people find me blunt. My neighbors do not dislike me or like me. I guess I just don’t understand these Southerners.

A: Southerners like to be told nice personal things […] You don’t have to be a hypocrite, though. The South is more personal than the North.[i]

Such was the insight offered by Jean Bruce, the pseudonym of Ruth Ramsdell Campbell, in 1960 in her advice column in The Tennessean. Although her name may not meet much recognition today, she answered local letters for twenty-three years, offering opinions and advice to the thousands seeking help. 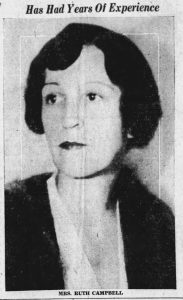 Ruth Ramsdell was born on February 11, 1883, in Manistee, Michigan, the youngest of fourteen children. At the age of sixteen, she left the United States for Europe, where she attended schools in France, Britain, Germany, and Italy. She returned at the age of nineteen, and, two years later, she married Jones Francis Campbell, a bass baritone singer. Soon after World War I, Ramsdell Campbell became a widow and thus began a literary career to support herself and her child. Between the 1920s and 1930s, she had already published fourteen children’s books. Then, in 1936, she started her professional career as a columnist for the Georgian American in Atlanta. In 1939, when the journal failed and shut down, she worked for two years for the Knoxville Journal, and, in 1941, she started a six-year collaboration with the Chicago Sun. Eventually, in 1947, she again moved south to Nashville, Tennessee, and started working as a columnist for the Nashville Tennessean. She would remain there until her death in 1975. For her column, she chose the name of her husband’s Scottish aunt, Jean Bruce, because of her wisdom and witty sense of humor.[ii] Her column in The Tennessean was entitled “What’s Yours?” and appeared for twenty-eight years in The Magazine, the Sunday insert to the newspaper. By the end of 1954, her column was popular enough to also be published in the regular Tennessean edition on Monday, Wednesday, and Friday. On April 19, 1975, the front page of the Saturday issue of the Nashville Tennessean announced the death of Ruth Ramsdell Campbell, aged 92.

Her style remained unchanged between 1954 and 1961. Her writing was plain and simple, and with a tone similar to the contemporaneous Ann Landers.[iii] Most of the time she maintained

what cannot be better defined than her severe-but-also-caring aunt persona.

In some way, Mrs. Bruce accompanied Tennesseans through a period of great changes and revolutions. Starting with her activity in the post-War era and ending after the most intense years of the Civil Rights struggle, her column attested to the fall of Jim Crow, the rise of the new South, the onset of the Cold War, the sexual revolution, the counterculture of the 1960s, as well as the development of new roles and accepted norms for women and youth both in and outside the South.

Dr. Valenzani’s article “ ‘Dear Mrs. Bruce’: Nashville Society Seen through Letters to the Newspaper Advice Column, 1954-1961,” appears in the Winter 2020 issue of the Tennessee Historical Quarterly, which can be ordered here.