Hernando de Soto and his private army emerged from the dense forest of the Blue Ridge at the end of May in 1540, and began descending the Nolichucky River valley. The conquistadores – conquerors – finding their way into the future Tennessee, searched for gold, copper, silver, and pearls. The “Christians,” as De Soto’s men identified themselves in their accounts, brought with them loot from towns to the east of the mountains, especially baskets of freshwater pearls. 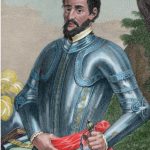 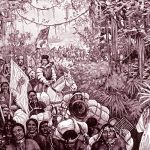 Crossing the peaks in the hot days of late spring, Garcilosa de la Vega tells us about foot soldier Juan Terrón, wearied from the weight of his load. Taking a linen bag out of his knapsack, he asked a friend to carry it – more than six pounds of unbored pearls. His friend refused, suggesting Terrón buy horses in Havana. Terrón, angered by the refusal, growled, “Well, since you do not want the pearls, I swear to God that I will not take them either, so they will remain here.” He then opened the bag and scattered the pearls as if sowing seed, and returned the empty bag to his knapsack. Terrón’s friends scrambled for the pearls, as big as hazelnuts and fat chickpeas. Afterward they taunted him with the sing-song “perlas no son/para Juan Terrón” – “pearls are not for Juan Terrón.” Heckled this way for several days, Terrón finally cried out, “For the love of God, do not mention this matter to me again; I assure you that each time you remind me of my stupidity, I feel a desire to hang myself from a tree.” 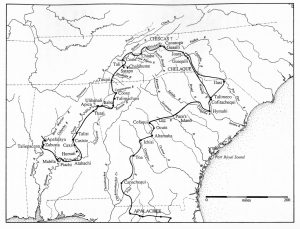 De Soto first encamped at “Guasili,” a Pisgah culture village that was likely at the Plum Grove site near present-day Embreeville in Washington County. In addition to living off the land – especially the foods they could take from the native peoples they encountered – the conquistadores also needed forage for their horses, dogs – Irish wolfhounds and greyhounds — and pigs. The Indians at Guasili provided them with little corn, but “there gave him [de Soto] a present of three hundred dogs, because they saw the Christians esteem them, and sought them to feed on them…,” and twenty baskets of mulberries. These dogs were likely a small, barkless Chihuahua type, popular in the Mississippian culture’s diet.

De Soto next marched parallel to the Nolichucky to the French Broad River and Chiaha, seven days away. Archaeologists now believe this major, fortified town, subject to the chiefdom of Coosa in north Georgia, was on Zimmerman Island, near Dandridge in Jefferson County. 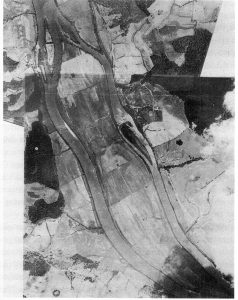 “Two leagues before he came to Chiaha, there met him fifteen Indians loaded with maize, which the cacique [chief] had sent; and they told him on his behalf, that he waited his coming with twenty barns full of it; and further, that himself, his country, and subjects, and all things else were at his service,” writes the Gentleman of Elvas in his 1557 memoir of the expedition. “On the fifth day of June, the Governor entered into Chiaha. The cacique voided his own houses, in which he lodged, and received him with much joy, saying these words… ‘Mighty and excellent lord, I hold myself for so happy a man, in that it hath pleased your lordship to use me, that nothing could have happened unto me of more contentment, nor that I would have esteemed so much…’” De Soto “thanked him very much for his service and offer, and that he would always account him as his brother.” 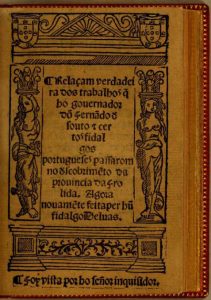 The cacique of Chiaha and his people shared more than corn with the Spaniards. Impressed by its foodstores, Elvas tells us, “There was in this town much butter in gourds melted like oil—they said it was the fat of bears. There was found, also, great store of oil of walnuts, which was clear as butter, and of a good taste, and a pot full of honey of bees, which neither before nor afterward was seen in all the country.”

Honey? Before the introduction of European honeybees? The stingless bees Melipona beecheii and M. yucatanica were the only native bees cultured to any degree in North America. The bees were extensively utilized by the Maya civilization for honey, and regarded as sacred. Was this pot of honey a rare trade item from Central America, shared with these fearsome guests? 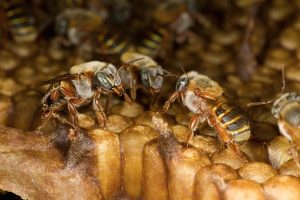 Beecheii bees on a comb.

De Soto and his followers stayed at Chiaha for more than three weeks before pushing on toward Coste, on Bussell Island at the mouth of the Little Tennessee River, then up the “Little T” to Tali, probably at the site later known as Toqua. Determined to explore the reputed riches at Coosa, the army departed up by way of Ocoee to the much-used prehistoric, and later historic, portage between the Ocoee and the Conasauga Rivers. By mid-July, they entered Coosa, just east of present-day Carters, Georgia. 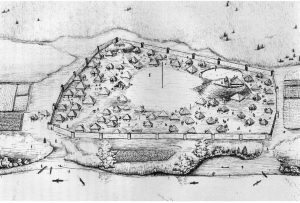 Among the estimated 600 soldiers and 100+ female and male servants and slaves who started out with de Soto, were the first Europeans and Africans to enter the Tennessee region. For the almost 500 years since, the history of people of European, African, and Native American descent has been intertwined in the Volunteer State.

The Tennessee explored by British colonists in the 1700s would be a different world from the one seen by De Soto and the Gentleman of Elvas. Anthropologists estimate that as much as 95% of the Native American population in the New World perished in the first 130 years after European contact, chiefly from smallpox. Out of an estimated 100 million people, as few as 5 million survived. The Cherokee, Shawnee, and Chickasaw who emerged from this carnage had little memory of the great Mississippian culture chiefdoms encountered by de Soto.