College Football and When Vanderbilt Ruled the South

College Football and When Vanderbilt Ruled the South 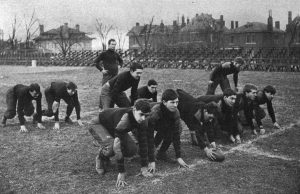 Since Vanderbilt University joined the Southeastern Conference (SEC) in 1932, the Commodores, as they are known by, produced a 143-425-17 (25.2%) league record leaving many to potentially wonder—why and how the school got the opportunity to be part of the SEC? The SEC is currently one of the top-playing and revenue-producing college football conferences in the Division I Football Bowl Subdivision of the National Collegiate Athletic Association (NCAA). Membership in the SEC is thus considered highly prestigious and one that brings great public acclaim and distinction.It is likely that contemporary fans of southern football do not know about the impressive football-playing history previously delivered by Vanderbilt. For instance, from 1890 through 1931, Vanderbilt produced a total of 14 conference championships between the Southern Intercollegiate Athletic Association (SIAA) and Southern Conference, predecessors to the SEC, and an overall win/loss record of 258-77-23 (77%). Notably, such success prompted many fans of this era to suggest the “the height of a southern coach’s desire is to ‘beat Vanderbilt.’ That is the ultimate, for a win from Vandy’s coach is the brightest bouquet, the most glittering jewel, the superlative degree of coaching triumph.”[i]

Local and campus media outlets (e.g., The Hustler, Vanderbilt’s Athletic Association newspaper) and even national personalities (e.g., Grantland Rice) of this period also often complimented the quality of play emanating out of Nashville by frequently identifying Vanderbilt as the “supreme” program in the South and substantiating this by selecting “the entire team as All-Southern” and Dan McGugin as the outstanding coach over multiple years.[iv] Famed sportswriter Lorenzo “Fuzzy” Woodruff added further legitimacy to the strength of the school’s football program by suggesting the emergence of professional ringers in the South was a result of “the absolute dominion Vanderbilt had over the whole football situation in Dixie. The colleges were desperate over their inability to cope with the Commodores. Alumni decided if Vanderbilt couldn’t be beaten by fair means, it must be beaten by foul.”[v]

Next, it should be noted that the early success of Vanderbilt football often generated large crowds at the Vanderbilt Athletic Park and later Dudley Field, which were simple wooden facilities. Featuring tailgate parties and accompanying socials organized by campus groups and the region’s elites after games, football in these temporary venues subsequently engendered discussion about the development of a permanent stadium that was better representative of the prestige associated with Vanderbilt University and to demonstrate the affluence of the Nashville community.[vi] The construction of a legitimate stadium was the last of a planned approach “to create a modern, secularized institution modeled upon leading northeastern universities.”[vii] Furthermore, in the case of Vanderbilt, a new stadium was also part of a great master plan of the university to build a “Unified University”, which included a new medical center and hospital.[viii]

Stadium construction in the Northeast and developing throughout the Midwest at other major institutions of higher education occurred as the most substantial tool to generate public attention, improve campus spirit, advance alumni relations, and increase enrollments. Vanderbilt officials and local “civic, commercial, and other public-spirited clubs” such as the Vanderbilt Athletic Association, Rotary Kiwanis, Lions, Exchange, Civitan, Optimist, Knights of Columbus, Shrine, Chamber of Commerce, and Junior Chamber of Commerce ultimately developed a campaign to build a new stadium. Eventually, the new 20,000-seat Dudley Memorial Field emerged in 1922 as “the first great athletic stadium erected in the South.” Costing over $230,000, many notable items and/or aspects of its construction helped establish that building as a great “source of great pride” for the institution, community, and region. For instance, the aforementioned campaign attracted many to provide gifts to the facility, such as the $10,000 provide by local philanthropist and businessman Walter O. Palmer to build a state-of-the-art field house that afforded “comfort, convenience, and necessity of the athletes of both home and visiting teams.” Next, the large spacious building offered a modern press box capable of rivaling the best on the east coast in technology (e.g., telegraph and telephone services) and comfort. Lastly, the stadium offered multiple concession opportunities and safety features to assure fans of good experience entering, spectating, and leaving the facility.[ix] 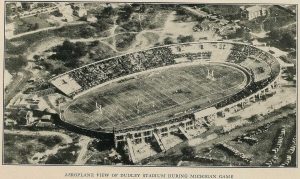 Finally, during the 1920s and into the 1930s, Vanderbilt parlayed these assets into opportunities to schedule Northern and Midwestern schools. As an example, Vanderbilt scheduled and beat or tied the University of Michigan, University of Maryland, The Ohio State University, and the University of Chicago, among others during this time period when very few Northern or Midwestern schools would play Southern schools because of their perceived lack of quality (i.e., as an institution and team). In the end, it should be obvious that Vanderbilt received an opportunity to be part of the SEC during the early era of college football in the South because Vanderbilt had the best coach, high-performing teams, enthusiastic fan base and campus spirit, attractive media attention, and a premier stadium, which allowed them to rule the South in football for a substantial period of time.

Dr. Seifried’s article, “Life before Neyland: The Early Development of Food Fields at the University of Tennessee, Knoxville,” was co-written with Benjamin Downs, Jeffrey Graham, and Adam Love. It appears in the Fall 2020 issue of the Tennessee Historical Quarterly, which can be ordered here.