The Civil War divided Tennessee just as it did the nation.

When the state first voted on secession in February 1861, Tennesseeans rejected leaving the Union. A second vote was held in June 1861, after the firing on Fort Sumter and Lincoln’s call to Tennessee for soldiers; 105,000 voted in favor of leaving the Union to 47,000 against. West Tennesseans, whose plantation economy relied on the labor of the enslaved, supported secession before United States forces fired on Fort Sumpter in 1861. East Tennesseans, who owned far fewer enslaved people, opposed secession two-to-one. Middle Tennesseans were divided between avowed secessionists and more ambivalent Unionists. Though the state ultimately voted to leave the union (and it was the last state to do so), East Tennessee remained a stronghold of Unionist sentiment throughout the war and many of the 31,000 Tennesseans who served in the United States Army came from East Tennessee.

During the Civil War, Tennessee’s rivers and rails were critical arteries to the Deep South, and both United States and Confederate forces fought hard to control them in major battles like Fort Donelson, Shiloh, Stones River, Chattanooga, Franklin, and Nashville. By mid-1862 the Union Army occupied much of Middle and West Tennessee, while the Confederates held on to most of East Tennessee. Confederate irregular forces launched repeated guerilla campaigns against the occupying U.S. forces, keeping the western theater of the Civil War active throughout the conflict. Similarly, U.S. irregulars staged raids and attacks in East Tennessee. Ordinary Tennesseans faced tremendous hardships during the war, losing their property, stability, and lives. Enslaved Tennesseans fled across the federal lines seeking freedom only to be detained in contraband camps; among these, able-bodied African American men took on the most dangerous and least desirable tasks of warfare as part of the United States Colored Troops (U.S.C.T.).

Following the end of the Civil War in 1865, Tennessee became the first secession state to rejoin the United States, marking the beginning of Reconstruction and a century-long effort to reimagine a society in which people of all colors enjoyed the full rights of citizenship. 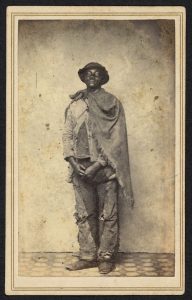 Photograph labeled contraband, an enslaved man who escaped across federal lines during the Civil War. 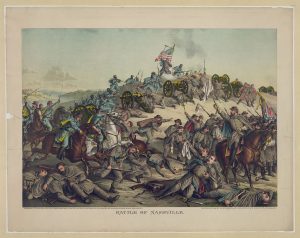 Kurtz & Allen c1891 print of the Battle of Nashville. Note the USCT visible in the background.