Throughout the United States, every state has a variation of a law mandating that infants and young children be fastened in a car seat when in a moving vehicle. A parent cannot even leave a hospital with their newborn baby without having a car restraint that meets U.S. safety standards.1 This is because motor vehicle accidents are the number one cause of death for children and adolescents in the United States2 and car seats reduce the chance of injury in a vehicle crash by 71–82%.3 However, mandating car restraints for newborns and children by law is a relatively new phenomenon, and it was Tennessee that became the first state in the nation to pass such a law. 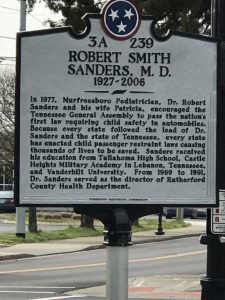 In 2018, Patricia Sanders, widow of Dr. Sanders, unveiled a Tennessee Historical Commission marker in his honor. The marker is located at the intersection of West Burton Street and North Maple Street in Murfreesboro.

Passing the 1977 Child Passenger Protection Act, as it was called, was the result of years of grassroots efforts, lobbying, and educational work done by pediatricians and groups such as the State Health Planning Committee and the Accident Prevention Committee of the Tennessee Chapter of the American Academy of Pediatrics. In particular, Dr. Robert Sanders, who was pediatrician and chairman of the Accident Prevention Committee and director of the Rutherford County Health Department, was an unstoppable force behind the grassroots movement that led to the passage of the Child Passenger Protection Act.

On Dr. Sanders’ side of the political front were the sponsors of the bill: Representative John Bragg and Senator Douglas Henry. After several tries, rewrites, and opposition–including those who thought the bill was an infringement on parents’ rights and that child restraint devices would be too costly–the bill was signed into law by Governor Ray Blanton in 1977 after passing in the House with 57 votes in favor and 23 in opposition. Bragg’s support was especially crucial for getting the bill to pass.

The bill was enforced in 1978 with an amendment nicknamed “Babes in Arms,” which allowed an infant or small child to be restrained in the arms of an older passenger. In opposition to the amendment, Dr. Sanders told the Tennessean that “even a Rocky or a Tarzan can’t hold a child on impact at 30 miles per hour.”4 In 1981, the bill was modified to remove the “Babes in Arms” amendment. It soon became apparent that the Child Passenger Protection Act bill succeeded in saving the lives of many Tennessee children involved in vehicular accidents. As a result, all states passed similar child restraint laws by 1985.

Tennessee’s Child Passenger Protection Act of 1977 became a model for other states and therefore a national influence, effectively “immunizing” the childhood epidemic on the roads. Thanks to pediatricians, scientists, and politicians, countless lives have been saved due to the success of the car restraint passage and movement.

Ms. Elliott’s article on the Child Protection Act of 1977 appears in the Fall 2020 issue of the Tennessee Historical Quarterly, which can be ordered here.